Skip to content
Home » Reviews » Is Bitcoin Dead? What Stats and Experts Have to Say? 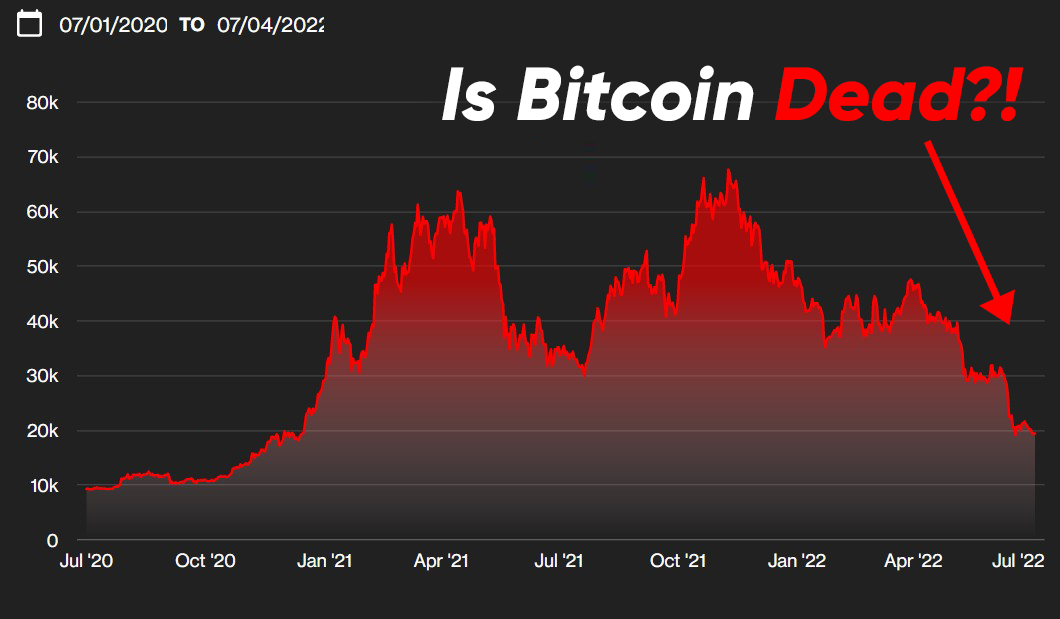 Everyone knows what Bitcoin is: A digital currency that allows users to make safe transactions that don’t rely on trust or centralized institutions like banks.

While writing these lines, Bitcoin’s price is at $20,200, give or take. This cryptocurrency reached a $60,000, almost $70,000 peak in November 2021. The decline in Bitcoin’s value is noticeable and impossible to hide. But what does this mean? Is Bitcoin dead?

This post will review experts’ opinions on this matter and several stats surrounding this cryptocurrency. By the end of the article, we’ll be able to solve the question of whether bitcoin is dead.

According to Investopedia, Bitcoin’s price history presents highs and lows. Cryptocurrencies are immensely volatile, resulting in market peaks and losses every now and then. The highest price was in November 2021, with a value of $68,000-$69,000. On the contrary, the lowest price after skyrocketing was in December 2020: $6,600.

As the article suggests, the price fluctuation reflects the investors’ enthusiasm and dissatisfaction with Bitcoin’s promise over the months and years. There’s no way to know whether Bitcoin will crash or skyrocket again, though the market changes suggest investors are not ready to let it sink just yet.

Is Bitcoin Dead? Sceptics vs. Metrics

Scepticism is still present in the cryptocurrency world – Some people don’t grasp the value of a digital asset that allows users to make safe and decentralized online transactions. That partly leads to mass hysteria and statements about Bitcoin being dead every time the price goes down.

It’s safe to say that digital and crypto assets are not dead. Surveys conducted in the past months show that most people are still enthusiastic about them. But it doesn’t stop the voices of crypto-sceptics from getting louder by the day. The question that arises next is: Where does the scepticism come from?

Some claim it destroys the environment, while others don’t appreciate billionaires and influencers telling them to join the trend. Others believe the volatility will lead them to lose all their money. While no one forces them to join the world of cryptocurrencies, their claims may lead others to invest less.

Investing is a very emotional process, meaning that a bit of fear can spread from one to the other and cause a selling stampede. The smartest investors leverage those fear moments to buy and then sell when the price increases again. The sceptics, on their behalf, will claim that Bitcoin is dead every time things don’t work out the way they expected.

Why does the Cryptocurrency Market Crash?

As it happens with the overall market, the prices sometimes crash. Many factors come into economic events like this one, but there are three reasons worth mentioning: Market stabilization, market inflation, and volatility.

Inflation has led the Federal Reserve and other central institutions to raise interest rates. This scares investors who look for a safe port, and thus they stop investing as much in the Bitcoin currency due to its volatility, making its prices crash.

Even the people who’ve made millions in the Bitcoin market will tell you that success is far from guaranteed. Cryptocurrencies are so volatile that you never know if you’ll make a fortune or lose all your funds. Volatility in the market can be good – It leads to higher buy-and-sale opportunities. But too much of it may drive investors away.

Last but not least, this volatility implies more market stabilization. If the prices go too high or down, the government and other financial institutions may step in to prevent inflation. Other isolated factors involve news like Elon Musk suspending bitcoin payments.

Google’s searches for “Is bitcoin dead?” have risen in the past few weeks and months. As this chart indicates, the searches for the keyword “bitcoin dead” have significantly increased in June 2022. In fact, the search rate has become a historical record. The recent crash has left more than one individual afraid of losing money, but the price is slowly recovering.

Some experts believe that this slow recovery of Bitcoin’s price is due to investors wanting to buy cheap and then sell high. However, the overall BTC trend is still declining. Is that a reason to freak out? The Bitcoin history chart over the years shows that support points are around $30,000-$40,000, meaning that investors don’t want the price to go lower than that.

It’s safe to expect that, even when the price is under twenty thousand dollars, the crypto market will normalize again, and the price will stay at $30,000-$40,000.

But predicting the future can be tricky, and no one truly knows what comes next. DigitalCoin is a website that forecasts, based on metrics and stats, the value that cryptocurrencies will hold in the future. The website estimates that the Bitcoin price will at least reach $94,143.20 by 2030.

The founder of SkyBridge Capital, a global investment firm headquartered in New York City, claims: “I can’t predict the future, but what I can see is there is a tremendous amount of robust development and adoption. […] I don’t think there’s any going back…” He and his company continue to invest regardless of the market crash.

There’s something that most tech and finance gurus agree upon: There’s no going back from the blockchain. And that may be the main reason why Bitcoin is not and won’t be dead anytime soon. Investors need to focus on the long-term results of BTC and the blockchain.

Crypto is here to stay regardless of market volatility. With almost 20,000 different types of cryptocurrencies, blockchain technology has proven itself to be solid and relevant. It promises a future where banks and financial institutions don’t control and regulate every transaction – Thousands of computers will instead.

Mark Cuban, an American businessman and owner of the NBA’s Dallas Mavericks, is an investor in blockchain and technology. He tweeted that the crypto crash resembles the lull the Internet went through. Cuban predicts that the only blockchains that will thrive and emerge from darkness are those that use “smart contracts to improve business productivity and profitability.

Smart contracts are programs that run when certain conditions are met. They are autonomous, decentralized, and transparent. Once deployed, most of them aren’t reversible or modifiable. The key benefit of these contracts is that they eliminate the need for intermediaries and contract enforcement in an agreement.

It’s rather simple. “A” is a condition necessary to trigger “B.” Once A occurs, B is triggered. Financial applications for smart contracts include trading, investing, lending, and borrowing. Smart contract applications include gaming, healthcare, and real estate applications. But the possibilities are endless.

So most experts believe this technology is here to stay, and thus the question “Is Bitcoin dead?” has a straight answer: No. The prices may go up and down because that’s the nature of cryptocurrencies: Volatility. But that doesn’t mean the technology or the currency is or will be dead soon.

Studies, surveys, and market research suggest that BTC is not and won’t be dead anytime soon. There are still a hundred years ahead of us for bitcoin mining. Even when the mining stops, blockchain technology will stick around.
DigitalCoin estimates that the Bitcoin price will at least reach $94,143.20 by 2030.

How many Bitcoins are left?

There are close to 2 million unmined Bitcoins. Here’s how Bitcoin works. Miners validate transactions and create new blocks in the blockchain as a way of maintaining network integrity. They receive the remaining Bitcoins as a reward.
But Bitcoins are not infinite, and experts estimate that we’ll run out of new ones by 2140. Once our society reaches that point, miners will receive transaction fees for their participation in the network, which is crucial to getting the cryptocurrency world going.

Is Bitcoin still being worked on?

Like most emerging technologies, Bitcoin is indeed still being worked on. You can think of it as a beta version that still needs development and new features. There’s always room for improvement.

Should I buy Bitcoin?

The answer depends on many factors. If you’re okay with risking money – Every investment comes with risk – then go for it. The Bitcoin price is low right now, meaning you can buy low and sell high if the price skyrockets.

As with any type of investment, and especially one that is so volatile, there’s no guarantee that you’ll make money, so beware and educate yourself before taking the leap.

Once you’re sure you want to begin trading, you may want to find a trading bot. It’s humanly impossible to keep up with everything you need to know and notice to make a profit. Fortunately, technology can do it for you. These are the two best crypto traders in the market:

This trader allows you to trade Bitcoin and other currencies like Ethereum and Litecoin. The key feature of Bitcoin Trader is that it automates the trading process so that you can make a profit automatically when prices are in your favor.

If you’d rather manual trade, the software also allows you to see trading indicators and real-time stats to make the decision on your own.

BitcoinTrader works by analyzing historical data and mapping out market trends, then using complex algorithms to generate signals. A team of experienced brokers receives the signals, reviews them, and executes trades on the user’s behalf.

Bitcoin Trader claims to have a learning algorithm that adapts to trades, mistakes, and false-positive signals. They believe it will be able to learn and improve upon its already impressive success rate over time.

It’s fully automated and guarantees to make a profit out of your initial investment. The platform claims a success rate of around 92%, meaning that approximately nine transactions out of ten are successful.

The software will let you know via notification every time they make a successful and profitable transaction on your behalf.

Many investors are driven away from trading oil because of high fees and strict regulations. However, this new software makes things easier for individuals who want to enter this world.

It’s an online fee-free trading platform for oil commodities. Interested traders can profitably and effectively place trades on the site. They only need a device with a steady Internet connection for this.

The system allows you to monitor oil markets and trade crude oil via their dependable broker network. Users can trade commodities, assets, and currencies with Oil Profit.

The Key Takeaways: Is Bitcoin Dead?

Reviews 0 3,385 views
Everyone knows what Bitcoin is: A digital currency that allows users to make safe

Reviews 0 2,780 views
People have been talking about Bitcoin trading for quite a while. Today, automated trading

How to convert Itunes Gift Card to Bitcoin
0 5120

Why Is Cryptocurrency So Volatile?
0 4252

How to Trade Cryptocurrencies
0 4471

The Future of Trade: Cryptocurrency Exchanges and Brokerages
0 3657